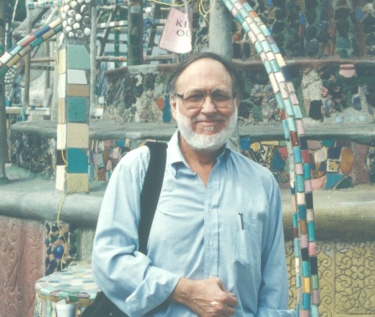 
In Celebration of Seymour

Back in the early 1990s, Seymour Rosen had a T-shirt made for SPACES, the organization he founded in 1978 dedicated to the preservation of visionary folk art environments. On the front and back of the shirt was an A to Z listing of some of the various terms and words used to describe these environments, starting with "art / abrasive subculture / alien / alternative" and ending with "weird / without history / without outside influence / yard show / yard shrines".

Many of the words and phrases on that list describe Seymour as well: "evolutionary", "inspired", "irrepressible", "non-conformist", "obsessive", "real", and "visionary".
(Yes, yes, I suppose in small print we would have to add the phrases "often crabby" and "antagonistic ol' fart who would piss ya off at least once during your friendship".)

At the very bottom of the T-shirt list Seymour added, "ART . . . and other hegemonic icons not yet accepted in New York and so forth".

Thanks to Seymour's vision, hard work, and perseverance, the icons of environmental folk art have been accepted by the world (and perhaps even New York).

So long, guy.
I hope that old Sam is giving you a grand tour from the 99th foot of the Towers. 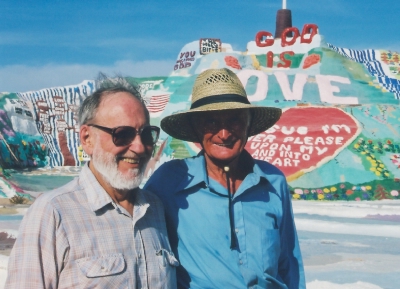 Seymour with Leonard Knight at Salvation Mountain, 2002
("yes, Mr. Rosen, I should have taken more overall site photos
without those people in the way. I know, I know.")

Thoughts on Seymour from
his friends around the world. . .


Many years ago I was friends with Seymour when in art school, and shortly thereafter. He had been photographing all the graffitti he could find from coast to coast before anyone knew to pay attention. I was then consumed with the survival tactics of single-parenting with no money, family, etc. and left the world of art to achieve that goal, such as that achievement was at the time. A little free-lance, editing, a lot of other things, a 10 year stint as licensed MFT bringing art-making to the mentally ill, all ages, severities.

I thought of him often and until recently hadn't the lucidity necessary to google him and see if he was in cyberspace. I wondered if he was still in Hollywood in that great old house on Van Ness (if my fading memory serves me). I thought he might like to hear that one photographer friend of the past was now full-time fine art photo-ing and imagined we would have lunch, say hi and all that. I am so terribly sad to see that this cannot now happen and it is a great loss. I am glad though to see the recognition and continued passion he had maintained and he looks happy and contented in your photo. Very sad news.


This news has made me very sad. Seymour and I go back twenty years. Most recently we sat outside at the Farmer's Market having tea and he reminisced about the extraordinary art and design scene he found himself in the 50s and 60s in Los Angeles. And even with all his aches and pains he was determined to be a flirt!


Just like Sam, Grandma, Art, Sanford, Ross, and so many others, Seymour was way ahead of his time. "Art is serious business, this genre simply cannot be categorized", scoffed the lofty art world. Who is having the last laugh now? Go ahead and celebrate yourselves! You were all on the inside before outside became inside.

A quote from Seymour's book sums it up:

"What distinguishes the builders of fantasy environments from most people? I had my theories, but they went very quickly.

What these builders seem to have in common is whimsy, independence and tenacity. Most of them like people and they like themselves.They share a sense of caring, especially for small things, and are not awed by "professionals" of any sort. Very few worked from overall plans; their creations just grew.

What seems to make these people different is that they took their dreams and made the time to do something about them."

Without realizing, I think Seymour was writing about creating SPACES. It all fits, doesn't it? Seymour's SPACES and all his backyard builders drew people inside to other worlds, inside other ways of seeing. Why are they called Outsiders? Beats the hell out of me.


I met Seymour when my husband was stationed at Fort Ord in 1958/59 and Seymour was at Camp Roberts. He showed us Watts Towers to the music of Sonny Rollins' Saxophone Colossus. He actually took pictures of our first baby. I saw The Twist being danced at a party at his Fairfax Avenue apartment, with signs all around the walls saying "Sex Relieves Tension". He came to our apartment for dinner and I made the mistake of serving shrimp. Seymour never ate shellfish or pork. The last time he had dinner at our home he stood close to me and said "I like to come to your house." I could always get him to take something home.

I'd like to believe that Seymour is at peace now. We love him and will miss him.


I first met him in 1973 when I lived in Mendocino County, and of course still have the gift copy of his book that he bestowed on me, and the memories of his hospitality when I visited the big city.... including of our dumpster-diving exploits. You couldn't help but know of his generosity and kindness....... he knew what was important.


I was Seymour's neighbor from 1978-90. We both loved to collect "stuff" and make art from it, to photograph it, to document life around us if it be in Hollywood or Eastern Europe. I remember him warmly, I remember the wonderful woman Sumi who made beautiful Japanese flower arrangements in her free time when she wasn't the gardener on Van Ness, I remember his tenant the cat lady, and well many wonderful soulful memories.

nomiprevious from Van Ness and now in Jerusalem, Israel


Seymour always worked in a humble sort of way. He wasn't a big equipment freak. His cameras were to record and document and that he did very well. Did you know that in his darkroom he used glass Gallo wine bottles to hold developers, fixers and other chemicals. At least that's what he used at the Junior Art Center in Barnsdall Park. One other funny thing I remember was that Seymour liked to use some kind of a sandwich bag to hold 4x5 negatives. I hope he switched to something more archival later.

By the way, I remember Seymour was very good friends with Don Erkel (I hope I've spelled the last name correctly). I believe they were old army buddies. Don had a surplus business dealing with photography stuff. Seymour and I went many time to Don's warehouse in Hollywood to buy b&w photo paper and darkroom chemicals. Wow, more things are coming back to me now. I just remembered meeting Seymour's brother from time to time, I think he was in the textile business (Seymour always had one of his brother's large business calendars hanging on the Barnsdall darkroom door). I also remember that Seymour had a girlfriend for a while also who worked at the Junior Art Center. I'm not positive but I believe her name was Cheryl. They used to take me along sometimes to Japanese restaurants.

Sorry if I've rambled on, but it's just that Seymour played such an important role in my early days. I truly regret that I didn't keep in touch later. One gets so busy with all the challenges and problems of modern life and we forget the important things. I guess that's an old story. That's how I'm feeling now.

Here are some web links on Seymour, his accomplishments, and influence: 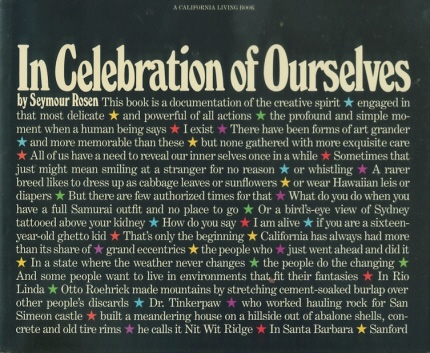 If you'd like to add any thoughts on Seymour, please send to:
narrowlarry@aol.com 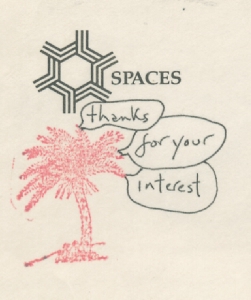 
back to selected visionary folk art environments in the u.s.