in the Southwest & Mountain States 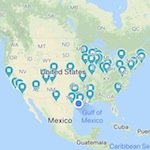 
Skyscrapers are always attention-getting, but I think they're overvalued; extruded lease space doesn't interest me a great deal. If I had to pick any favorites, besides the Chrysler and Guaranty listed above, I'd have to say the Woolworth Building, Lever House, Empire State Building, and RCA Building in NYC, the PSFS in Philadelphia, Pietro Belluschi's Equitable Building in Portland, and Wright's quirky Price Tower in Bartlesville. There is one PoMod skyscraper that may belong in here - Cesar Pelli's Carnegie Hall Tower in New York. It was one of the strongest works Pelli ever did and one of the few examples of the cartoon-fest that was Post-Modern architecture that still looks fresh. And here's my Guilty Pleasure of the 80s: Architectonica's Spear House (AKA The Pink House).


More links to great American architecture are under my U.S. Travel Guide page.

. . . and my all-time most admired architects

Don't get near enough respect

Look 'em up, they were great

Koolhaas, MVDRV, UN Studio
(As Ivan Chtcheglov once wrote, "It soothes the eye and tells no story".)

Sorry, but I don't get it

Eisenman (Dr. E, architecture's egocentric fool of the millennium. Although I have to admit he did get one thing right; the Holocaust memorial in Berlin. He also founded the Institute for Architecture and Urban Studies, so perhaps he's not a total fool.), Venturi & Scott-Brown (Yes, Complexity and Contradiction is important and always worth re-reading, but their built work? Feh. An aside; I always thought that Bob & Denise & Izenour's original 1972 edition of Learning from Las Vegas was the best thing ever, unitl I learned that the knockout graphic design was the work of Muriel Cooper, the art director of MIT Press. Apparently the authors didn't care for knockout graphics and the following editions were, as V&S-B would say, ugly & ordinary.), Greg Lynn, Morphosis, Graves (except for the early Ft. Wayne houses . . . and I never really thought the Humana Building was all that horrible.), 70% of Gehry (Frank's not worthless - I liked the early raw stuff - and Bilbao & the Disney are indeed mesmerizing icons.), 78% of Meier (except for the perfect Douglas House . . . and there is this.), and last but not least, Libeskind (Danny shoulda stayed at Cranbrook and kept drawing his cool drawings). A note to Robert All-Mighty Stern: I really have no problem with historicism, but I do have a problem with flat, cartoonish historicism. Are you ever going to learn about proportion and depth?? (But even Bob's not totally worthless; his New York books are fantastic and his new condo at 15 Central Park West is retro-acceptable.)

* Steven Holl's Bloch Building addition to the Nelson-Atkins Museum, Kansas City, MO.
The fact that it truly is so sleek & sexy at night yet so lumpish & leaden in daylight makes it that much more annoying. At least it increases the appreciation of the original 1933 masterpiece. That being said, I do want to make a future pilgrimage to Holl's University of Iowa Art & Art History Building. From the photos the building appears to be crisp & poetic, qualities that I admire.

Joyless (joiləs) / ADJECTIVE / Not giving or feeling any pleasure or satisfaction; grim or dismal

What fresh hell is this? (21st century division)