A Tribute to Mr. Imagination

To me, he was the Beatles of visionary art; always full of joy, love, and endless creativity.

I first met Mr. Imagination back in 1998, when he made a trip to Houston to be honored at a conference of the Folk Art Society of America. I had signed up as a volunteer for the event, thinking that I would be tasked with distributing badges or pointing conferees to meeting rooms. A week before his arrival, I was asked if I would mind hosting Mr. I for the duration of the conference. My initial thought was, "Yikes - a world renowned art star at my humble abode? My guest room consists of a fold-out sofa - he should be staying in a big-time collector's home - I am not worthy !"

Four whirlwind days later, following the departure of his plane for Chicago, I felt big-time; I was friends with Mr. Imagination.

During the week after he had left I discovered small sculptures and drawings hidden around my house, each labeled "One of a Kind!" and "Your friend, Mr. I". Greg returned to Houston many times, for gallery exhibits of his art or to attend one of the Orange Show's legendary Halloween galas. For almost all of those visits I had the honor of hosting him.

He would always leave behind a gift; a gold sunburst figure made from discarded mini-blinds he found in my garage, an homage to ancient Egypt using broomstick straw and an old piece of granite, an unspecified species of fish fashioned from tin, nails, wire, and a dusty 2 x 4. (Besides artwork, he would also leave behind a stray bottle cap or two that I would find under a chair six months later !)

I always thought of his visits as something from a Dr. Seuss book; an adventure both exhausting and chaotic as well as magic and unforgettable.

Farewell my friend, you will always be One of a Kind.

At the 2007 fundraising gala
for the Orange Show Center for Visionary Art
Houston, Texas

my Mr. I collection 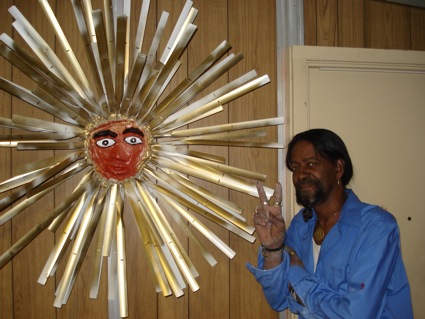 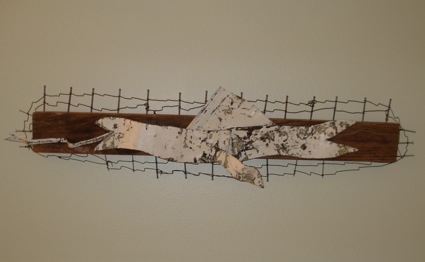 my very own bottle cap hat that Mr. I made from my grandfather's straw cowboy hat

bust of Mr. I by New Orleans artist Charles Gillam

more photos of Mr. Imagination and his artwork:


back to selected visionary folk art environments in the u.s.